He holds his helmet by his side, and a large steel 2-handed-sword in his right hand- the point of the blade rests on the ground. He wears a cape that is red on the inside, and white on the outside, with yellow trim on the bottom of the white section. 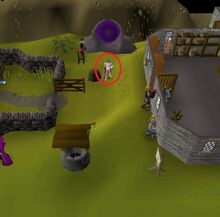 Sir Loyle T can be found directly in Edgeville, south of the ::shop teleport, which is north-west of the home teleport.

The Loyalty Point Store is mainly made up of cosmetic items, with a few exceptions where items have beneficial stats or bonuses.

On opening the store interface, a red chat message will appear in the player's chatbox, indicating to them how many loyalty points they currently have. This can also be ascertained using the in-game 'Game Panel'.

Basic Decorative Armour and Sword (Red): 2,500 Loyalty Points per piece - this has the combat bonuses of steel weapons and armour

Detailed Decorative Armour and Sword (Silver): 3,750 Loyalty Points per piece - this has the combat bonuses of mithril weapons and armour

Intricate Decorative Armour and Sword (Yellow): 6,875 Loyalty Points per piece - this has the combat bonuses of adamant weapons and armour

Decorative Ranged Top and Bottom: 7,500 Loyalty Points per piece - these have +20 and +15 respectively in all defensive stats and no offensive bonuses

Decorative Mage Hat, Top, and Bottom: 7,500 Loyalty Points per piece - these have +4, +20 and +15 respectively in all defensive stats and no offensive bonuses

Decorative Quiver: 3,750 Loyalty Points - this has +4 in all defensive stats and no offensive bonuses

Khazard Helmet and Top: 3,125 Loyalty Points per piece - The helmet has similar defensive bonuses to an Iron Med Helm, with +3 stab defence +5 slash defence and +3 crush defence. It has no magic or ranged penalty and no offensive bonuses

The top had slightly worse stats than a Bronze Platebody with +9 stab defence +11 slash defence and +10 crush defence. It has no magic or ranged penalty and no offensive bonuses.

Royal Seed Pod: 50,000 Loyalty Points - this is one of the only one click teleports that can be used up to Level 30 Wilderness, it will take players to the Grand Tree at the Tree Gnome Stronghold.

Ice Gloves: 50,000 Loyalty Points - these gloves allow players to collect bars from the Blast Furnace without needing to use a bucket of water

The first interaction option with Sir Loyle T and the default left-click option is "Trade Sir Loyle T". This will open up the Loyalty Point Store and is one of Sir Loyle T's main uses as an NPC

The NPC text interaction is started by selecting the second interaction option: "Talk-to Sir Loyle T". This begins a chat dialogue as follows:

There are four different chat options for the player:

"What are Loyalty points?"

The third and final NPC interaction for Sir Loyle T is "Examine Sir Loyle T" which returns the following text:

This will appear in the player's chat interface in the bottom left and can be done from anywhere from around 13 tiles at which point the NPC will be too far away to render on the screen.